Well, its happened. There you are minding your own business on Facebook, sending messages, writing posts and suddenly…you land yourself in Facebook jail. I know what you’re probably thinking, “Facebook has a jail?”. Yes, indeed they do, and this week I want to talk to you about ways to avoid this obnoxious set back.

I joke about it but this is something that has recently happened to me. I’m a social person, and SEVEN is a social organization.  It seems a bit strange to me that you can get cut off from socializing on a site that is specifically meant to be for socializing. Alas, it happened and it will be remedied in time. However, let’s talk about some of the things that can land you in Facebook “jail” and how to avoid those in your future. 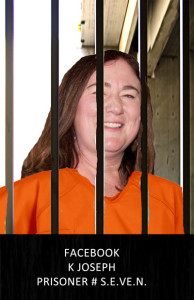 It is no secret that Facebook is constantly moving and changing the way they do things and where things are in order to accommodate everyone’s needs. This is particularly relevant when it comes to businesses. People have caught on to the incredible mostly free advertising that Facebook allows you to have. Because Facebook is now prepared for people to send out tons and tons of spam, they have made their limits to sending messages shorter and are therefore more likely to get upset at you for doing this.

“To avoid getting a “Facebook Time Out”, we basically have to control the speed at which we like and comment on things. This is not only to avoid being detected as SPAM, but also to control traffic information on Facebook (which would collapse if all users do too many things in too short of time.)”

Sadly, because there are always people who play dirty online, Facebook can easily confuse you with a SPAM bot or someone who is trying to annoy others in order to drive their own sales. Be very mindful of how many messages you are sending out and how frequently. You will want to keep these as minimal as possible to avoid your Facebook jail time. Believe me, I learned this the hard way!

2. CONNECT WITH PEOPLE YOU KNOW

To piggy back on that point, make sure you are only connecting with people who you have met or are sure of who they are. If you are unsure about someone who Facebook is recommending, my advice to you would be to ignore it completely. Did you know that if you send someone a friend request and they deny it, it automatically leads Facebook to keep an eye on you as they think you could potentially be SPAM?

My third point is to always write and post original content. While it is more than ok to share articles and other’s posts, you want to make sure all of your images and text rightfully belong to you. By posting something that is not legally your own (even if the actual company isn’t bothered by it) Facebook will see you as a threat and therefore shut you down before you even have a chance to explain your side of the story.

Next, don’t tag people in photos that aren’t actually there and don’t add people to groups without their consent. It probably seems obvious to you as you read this but adding people into large groups that will be discussing certain things can lead people to be annoyed and more apt to clicking that not so lovely “Mark as Spam” button.

5. HAVE AN ACCURATE PROFILE

Finally, be true to who you are and provide accurate information on your Facebook profile. Facebook needs to have a legitimate reason to put you in time out and it can only hurt you if you don’t have your information listed. In fact, hackers will often times put no information at all in an attempt to stay well hidden. When it comes down to it, just be mindful of how Facebook is changing and how they work. You may have the best intentions in the world but technology is fickle and can change the way they think and do things at the drop of a hat!

Have you ever been put in Facebook “jail”? If so, what landed you in there?

Help Others Always & Lift Others Up

I truly believe the sign of a strong influential leader is the ability and willingness to lift others up and help those around them. The ...
Read More
Networking

#LinkedIn connections in person, face to face, belly to belly

#LinkedInLocal is a meetup concept created by Anna McAfee with the purpose to meet #LinkedIn connections in person, face to face, belly to belly. It was then ...
Read More
Close